SEC and CFTC Give Testimonies at Senate Hearing on Virtual Currencies 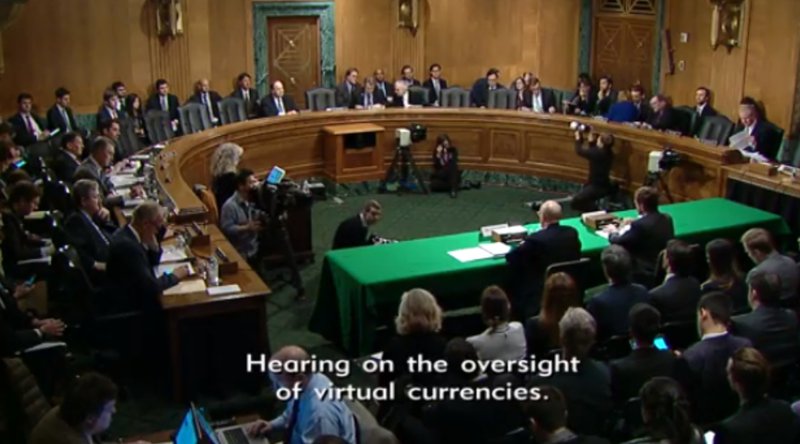 Today, February 6, 2018, the prospects for coherent U.S. regulation on cryptocurrencies became a little more clear, as were the impasses that were frustrating progress on the issue. The Senate Committee on Banking, Housing and Urban Affairs (the “Committee”) heard joint testimony from the heads of both the Securities and Exchange Commission (SEC) and the Commodity Futures Trading Commission (CFTC). While both the SEC Chairman Jay Clayton and CFTC Chairman J. Christopher Giancarlo provided written testimonies on February 5, 2018, the statements from the chairmen as well as the answers later garnered from Senate questioning gave some clarity as to the direction U.S. regulation of “virtual currencies” is headed. Below is a general overview.

Jay Clayton Loves Blockchains, Lukewarm on Cryptos, Not a Fan of ICOs

In his opening testimony, the SEC chairman called the topic of regulating cryptocurrencies, ICOs and related trading activities important, stating that “these markets are local, national and international.” From a market regulatory perspective, he stated, “For ease of analysis, I break this space into three categories. First, a promising new technology referred to as ‘distributed ledger technology’ or ‘blockchain’ … The second and third categories are cryptocurrencies and ICOs.”

While the chairman lauded and even asked for blockchain technology startups to alleviate inefficiencies in market regulatory frameworks, he was less enthusiastic about both cryptocurrencies and ICOs, stating that they are “subsets of the products seeking to take advantage of the commercial opportunities presented by blockchain.” Cryptocurrencies, according to Clayton, are “promoted to be a replacement for dollars,” while ICOs in his view are “like a stock offering.”

Clayton went on to state that while “those who promote these so-called virtual currencies assert that they will make it easier and cheaper to buy and sell goods, particularly across borders” and “that transaction fees and costs will be eliminated or reduced ... to date these assertions have proved elusive in many areas.”

While some could argue that the chairman’s opening commentary on cryptocurrencies was less than favorable, that impression was far overshadowed by his stance on ICOs. Per Clayton, “From what I have seen, initial coin offerings are securities offerings. They are interesting companies, much like stocks and bonds, under a new label.” He didn’t stop there, however, stating, “You can call it a coin, but if it functions as a security, it is a security.” Another cause of concern for Clayton on the ICO front:

An ICO may have nothing to do with distributed ledger technology beyond the coin itself.

The two problems “worth particular attention,” however, were the lack of regulatory oversight on the markets and that “many” ICOs are being conducted illegally by not following securities laws. Clayton wrapped up his opening volley at ICOs by warning the ICO market that “those who engage in semantic gymnastics or elaborate structuring exercises in an effort to avoid having a coin be a security are squarely within the crosshairs of our enforcement division.”

So much for ease of analysis.

The CFTC chairman began his opening remarks by revealing a story about how his own children’s interest in investing bloomed only last year with the rise of Bitcoin. Giancarlo remarked, “It strikes me that we owe it to this generation to respect their enthusiasm about virtual currencies with a thoughtful and balanced response, not a dismissive one.” He did urge, however, that regulators “must crack down hard on those who try to abuse [the younger generations’] enthusiasm with fraud and manipulation.”

Chairman Giancarlo’s remarks went on to elucidate the CFTC’s wish for regulators to thoroughly educate themselves and the public in order to create good policy choices and sound regulatory frameworks to protect consumers.

The next task, according to Giancarlo, is to educate consumers. According to him:

We’ve never conducted this much outreach for any other financial product.

Senator Mike Crapo, the head of the Senate Committee, asked both regulators, “Both of you said you don’t have complete jurisdiction, but do you have sufficient jurisdiction? Should Congress address by law the issue [of regulating virtual currencies]?”

SEC Chairman Clayton posited that all federal banking regulators should come together and have a coordinated plan for dealing with a virtual currency trading market, though he noted that they may at some point in the future find they need additional legislative authority. CFTC Chair Giancarlo concurred but directed the Committee to look at “gaps in the legislation” that could be presented. According to Giancarlo, there is patchwork coverage, but it is not enough to handle a regulatory framework that could be covered by a coordinated effort.

The issue of ICOs and their legality was an oft-revisited point during the Q&A portion of the hearing. The minority leader on the Committee, Senator Sherrod Brown, asked Clayton how much of the $4 billion in capital raised last year through ICOs was raised in the United States. The SEC chair couldn’t give any clarity but suggested the number was probably enough that regulators should be talking about the issue. Senator Elizabeth Warren also had her say on the issue, stating, “Some ICOs raise money for legitimate companies, but others, we know, are just Ponzi schemes.”

Senator Warren then referenced Facebook’s recent ban of cryptocurrency and ICO ads and asked SEC Chairman Clayton a series of questions “around” how to make ICOs safer. The senator asked, “In 2017, companies raised more than $4 billion in ICOs. How many of those companies registered with the SEC?” Clayton told Senator Warren that “not one” had registered. Pressing further, the senator asked the chairman how many companies with upcoming ICOs had registered with the SEC, to which Clayton gave the same answer. Unfazed, Senator Warren asked Clayton for a comment on why no one registered an ICO with the SEC. The chairman’s response was a vague admonishment of the “gatekeepers [the SEC] rely on” to assist them in ensuring securities laws are followed, saying they “have not done their jobs.”

Elaborating further, he stated, “What ICOs do is take the disclosure-like benefits of a private placement and then add to it general solicitation and promise to the investor of a secondary market without registering to us.” Senator Warren finished off her line of questioning, saying to Clayton, “I am understanding you to say [that] it [what ICOs do by not registering] is a violation of the law?” The SEC chairman simply answered, “Correct.” But he did moderate his views on the illegality of ICOs by stating, “I’m perfectly happy for these people to do private placements, but do them right.”

While not all of the questions were focused directly on clarifying future U.S. regulatory frameworks on “virtual currencies,” the cryptocurrency industry was made aware of the effort regulators and lawmakers alike took to learn about the new asset class.

Throughout the hearing, several senators demonstrated an awareness of problems currently plaguing the industry. References to the Coincheck hack in Japan, Mt. Gox and exchange vulnerabilities, and North Korean and Russian state agents’ potential for abusing prices in the cryptocurrency market all came up.

Senator Robert Menendez cited Venezuela’s attempt to circumvent sanctions using Petrocoin, while Senator Jack Reed stressed the need for technologists and computer expert personnel among the regulators to help them understand the burgeoning asset class. Senator David Perdue began a line of questioning about combating pump-and-dump schemes, regulatory arbitrage and financial arbitrage that prompted the CFTC chair to explain what “kimchi premiums” were. Most surprisingly, however, was Chairman Giancarlo’s attempt to define “hodling” to the Committee in the middle of an answer to Senator Mike Rounds about the commodity-like aspects of cryptocurrencies.

Some senators did conflate which countries took recent regulatory actions on virtual currencies, but it is a confusing enough subject that it is the cover story for Bitcoin Magazine this month. While not directly indicative of which regulatory measures the U.S. will take, industry participants can take some benefit from knowing legislators and top regulators are making an attempt to educate themselves and to thoughtfully institute measured regulatory frameworks in an effort to protect investors while not ruining the industry.